This can be a devastating disease caused by the bacteria Corynebacterium pseudotuberculosis. It is more common in sheep than in goats. It causes abscesses of the skin and subcutaneous lymph nodes that will break open to the skin’s surface and contaminate the environment. This disease may affect the animal internally, most commonly the respiratory system, causing long-term respiratory problems. It can also spread to the abdominal lymph nodes, resulting in weight loss; central nervous system, accompanied by neurological signs; and mammary glands, causing mastitis. 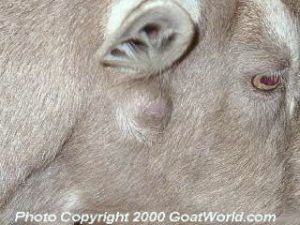 This organism can survive for prolonged periods of time in dark, damp areas, soil and manure. The most common means of infection is by injury with contaminated shears, tail docking equipment, dip tanks, needles and puncture wounds. Abscesses form, then break and drain into the feed bunk, water buckets or on the ground, predisposing the next animal to come along and become infected through a wound.

Diagnosis: Based on serological testing and culture of organism from abscesses.

Treatment: The abscesses should not be opened within the vicinity of the other animals. Isolate and quarantine affected animals for treatment. If possible, have the abscesses surgically removed to reduce contamination of the environment. If the abscess has already ruptured, the animal should be isolated, the abscess flushed with an antiseptic solution (3-percent iodine or 2-percent chlorhexidine) and packed with antiseptic saturated gauze. It is best to seek the help of your veterinarian.

There is evidence that injection of the abscesses with tulathromycin may cause more rapid regression. Injection of formalin is not recommended in food producing animals as it is a well documented carcinogen.

Prevention: Affected animals should be identified and culled for best control and prevention. Housing should be kept free of objects that can cause injury; all equipment should be properly cleaned and disinfected after use. When handling the contents of the abscess, wear disposable exam gloves and protective clothing to prevent spreading the organism. This disease can infect humans if not handled properly. Abscess contents need to be properly disposed.

Vaccination is controversial but has been shown to be beneficial in reducing the incidence of abscesses within a flock or herd already infected, although it will not result in complete disease eradication.