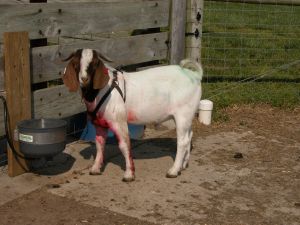 Exposure to males after a period of isolation — at least three weeks and one mile away — can be used for induction and synchronization of estrus during the breeding and non-breeding season without additional treatments in goats. The physiological basis for this response is due in part to smell and sight, with neither stimulus completely accounting for the response. It is not effective if the males and females are together all the time and sudden placement of male with females induces an LH surge and ovulation in days.

Females typically exhibit estrus within 72 – 144 hrs after which natural mating or artificial insemination (AI) can be used for breeding.  Less seasonal breeds respond the best to this method and it proves to be a viable and inexpensive alternative as a co-treatment in progesterone-based synchronization schemes for anestrous females

In studies conducted at both Delaware State University and the University of Maryland Eastern Shore, the buck effect was the only treatment required to synchronize estrus in does during the breeding season. All were bred within 12 days. The response to buck stimulation can be quite variable and is influenced by a number of factors:

When considering stage postpartum, this method alone has been shown to effectively synchronize estrus (all does bred in 10 days) with buck introduction 28 days post-kidding. Unless male-induced estrous activity is initiated preceding the natural breeding season, the response is temporary in nature, and the doe will return to anestrus. Hence, the practical application of the buck effect lies primarily in initiating breeding season early or in combination with some drug-induced, out-of-season breeding manipulation.

For additional reading on other methods of estrous synchronization please click on the link below:http://www.extension.org/pages/19331/goat-reproduction-estrous-synchronization