The major contributing factor for the rise in interest in goat meat production in the United States is the shift in demographics. According to the 2000 Population Census, the foreign-born population in this country is up 57 percent since 1990 — from 19.8 million to 31.1 million — and continues to increase in an upward trend that started in 1970. As of 2000, 51.7 percent of the foreign-born population was from Latin America and 26.4 percent from Asia. It is projected that the U.S. Hispanic population is rising at a rapid rate and will reach over 100 million or 25 percent of the population in the year 2050 (Figure 5). This group of immigrants has a strong preference for goat meat and will add to the opportunity for this sector of agriculture to grow. 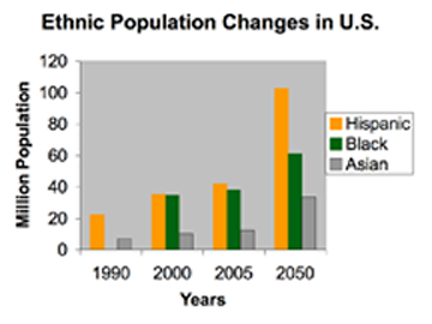 Although ethnicity and faith tradition undoubtedly overlap, as of 2000, more than 1 million Buddhists and 1 million Muslims, more than 10 million Asians and 35 million Hispanics were reported as residing in the United States. (U.S. Census, 2000). Again, this increase from 1990 to 2000 creates an opportunity for U.S. agriculture to produce new products to serve the food preferences of this ever-increasing population.