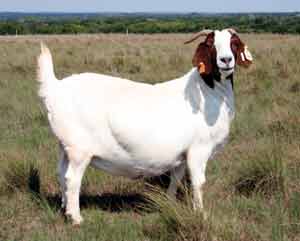 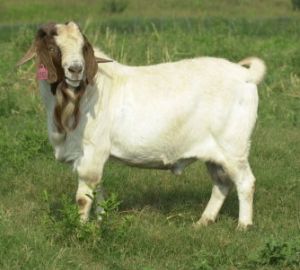 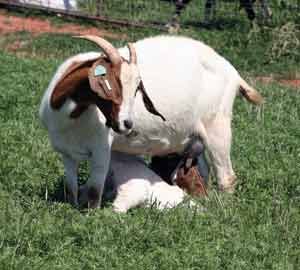 The Boer breed is characterized by a red head and red on at least a portion of the neck, with a white body. They have large pendulous ears. Some breeders have chosen to breed and promote solid color Boers, but there is little scientific evidence that they have any unique merit in productivity. Several Boer breed associations exist in the United States and each uses a set of standards related to appearance and function. The standards include characteristics that are acceptable, discriminated against and disallowed. Details are available through breed association Web sites. The breed was developed and improved in the Republic of South Africa. Boers were first imported into the United States about 1994 from Australia and New Zealand.

Docility, high fertility and a fast growth rate are some of the traits that set the Boer goat apart in the purebred and commercial segments of the American meat goat industry. With the characteristic red head, meat goat buyers are able to select for Boer influenced animals and these animals will often generate a premium over other colored goats of similar age and gender.

There is some evidence that the breed as a whole may be relatively more susceptible to internal parasites when used in the warmer, humid regions of the United States.

Boer goats are in high demand because they grow fast and produce desirable carcasses. Breeding animals have been very expensive due to the limited numbers originally imported, but recent numbers have increased sufficiently that prices have become more reasonable. Due to their scarcity and high demand, some animals that should have been culled because they were not hardy were kept for breeding purposes. Also, some of the animals were pampered because of high prices at the time, and as a consequence, some Boer goat individuals in the United States are not as hardy as Boer goats raised in South Africa.

Boer goats are the largest of the goat breeds. Mature does can weigh between 190-230 pounds, and mature Boer bucks can weigh between 200–340 pounds. They have been selected for growth rate and may gain in excess of 0.4 pounds per day under feedlot conditions.

The Boer goat is a popular breed for showing and is probably one of the most common goat breeds in the US today.