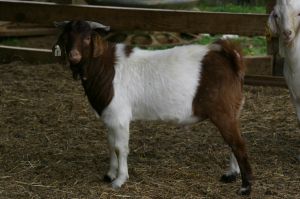 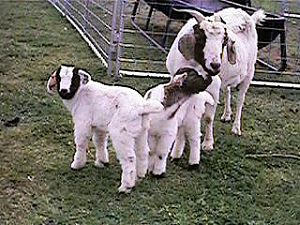 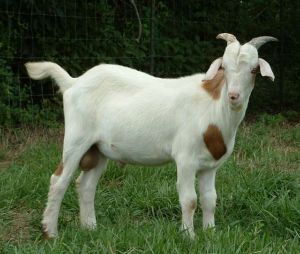 The Genemaster was developed as a composite breed. It is based on a foundation of three-eighths Kiko and five-eighths Boer. The breed will retain a portion of the original hybrid vigor over the next several generations. Still relatively early in its formation, there have not been studies in the public sector to verify level of performance of this genetic resource.

Goatex Group LLC has embarked on an extensive analysis in New Zealand to determine the most profitable mode of management for the production of primal cuts and carcasses of goat meat. It has identified a carcass in the weight range of 22-26.4 pounds (10-12 kilograms) as being potentially the most profitable for the following reasons: Purpose-bred goats correctly managed can deliver the target carcass weight at weaning or soon thereafter. A premium is attached in some markets to animals of this weight which are milk fed and slaughtered at weaning. Carcasses of this weight deriving from purpose-bred goats come from young animals with consequent tenderness and minimal numbers of carcasses condemned during the meat inspection process. Young animals of this weight tend to have higher cutting percentages.That is, they have more meat relative to carcass weight than older animals of the same weight. Target weight carcasses from young animals tend to have a greater degree of fat cover than those of older animals.

With these factors in mind, Goatex Group has been striving to produce an animal that will maximize returns for the farmer by producing a premium product at a minimum cost. To this end, the company has been crossing Boer males with selected Kiko females to produce trial lots of animals. The company now has F3 animals on the ground, and preliminary results indicate substantial gains over either contributing breed.

The results of their trial programs have proved so promising that Goatex Group has styled the resulting animals as Genemasters and is fixing the enhanced performance by moving to a three-eights/five-eighths cross. The company believes that such a cross will breed true, thereby giving rise to a truly purpose bred meat goat which will provide the basis for the economic commercial production of goat meat.