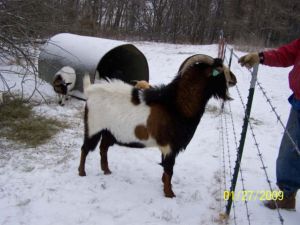 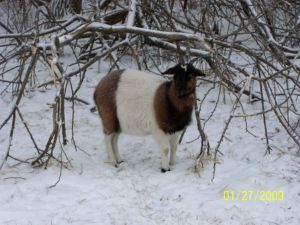 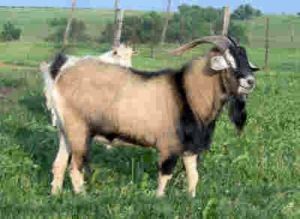 The word “kiko” had traditionally been used by New Zealand’s native people, the Maori, to describe substantial meat producing animals. In Maori, the Polynesian language spoken by the Maori people, “kikokiko” is the generic term for flesh for consumption. Originally, a consortium of New Zealand’s farmers were determined to continue the local usage to describe the enhanced meat producing goat they were developing.

The primary characteristic of the Kiko goat is its hardiness and its ability to achieve substantial weight gains when run under natural conditions without supplementary feeding. In addition, the female is capable of conceiving, carrying and giving birth to and rearing multiple offspring without intervention under less than ideal conditions. The Kiko is an aggressive forager, capable of thriving under conditions of feed deprivation.

This breed is generally solid white or cream in color although there are some of darker colors including black. Kiko goats have erect ears. The Kiko was developed in New Zealand to create a more muscular and productive indigenous goat. They have been in the United States only since about 1995. They grow rapidly, are somewhat angular in appearance, prolific and tolerant of rustic conditions. There is some indication the breed as a whole carries a useful level of resistance to internal parasites. They tend to be active and athletic and are aggressive breeders which makes them good at survival, but it also can make them a challenge to manage.

Data from a study conducted at Tennessee State University in 2004 indicated that Kikos may be more parasite-resistant than other breeds and have fewer problems with foot-rot. In that study, Kikos weaned more pounds of kid per doe as compared with Boer goats. However, Boer goats are preferred by buyers at sale barns. For this reason, many breeders will use a Boer buck on Kiko does.

Picture of Kiko buck (top) and Kiko are from Lazy B Kikos, Sedalia, Missouri.