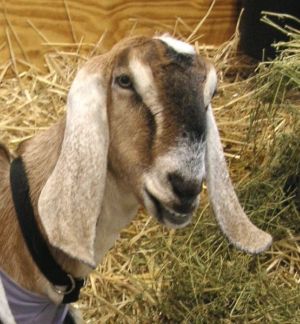 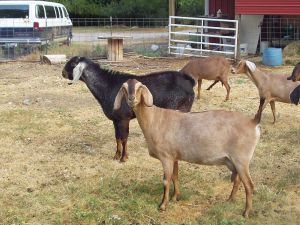 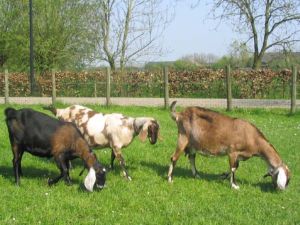 The Anglo-Nubian breed originated in England as a cross between the Old English Milch Goat and the Zariby and Nubian bucks imported from India, Russia, and Egypt. They have been exported to most countries from England. In the United States they are referred to as simply Nubians.

The head is the distinctive breed characteristic, with the facial profile between the eyes and the muzzle being strongly convex (Roman nose). The ears are wide, pendulous and long — extending at least one inch (2.54 cm) beyond the muzzle when held flat along the face. They lie close to the head at the temple and flare slightly out and forward at the rounded tip, forming a bell shape. The ears are not thick, and the cartilage is well-defined. The hair is short, fine and glossy. The coloring is mostly reddish, often with spots or mottling patterns.

Due to their Middle-Eastern heritage, these goats can live in very hot climates and have a longer breeding season than other dairy goats. They are considered a dairy, or dual-purpose, breed. Nubians are known for a high butterfat yield in their milk, on average, 5 percent or more butterfat content. This amount is surpassed only by that of the Nigerian Dwarf, Pygmy goat and Boer goat breeds, all of which are less likely to be used for large scale milk production such as in a dairy or cheese making. Because of the higher fat content, the Nubian milk has more flavor than lower fat milks. Milk production is lower than other dairy breeds on average.

Nubian does weigh at least 135 pounds (61 kilograms) and 175 pounds (79 kilograms) for bucks. The minimum height of the breed, measured at the withers, is 30 inches (76 centimeters) for does and 35 inches (88 centimeters) for bucks. Unlike other dairy breeds, Nubians have been used by some producers in the goat meat production sector. The breed is large, which brings associated rapid growth rates. Their large pendulous ears often suggest they make a good foundation for upgrading to the Boer.