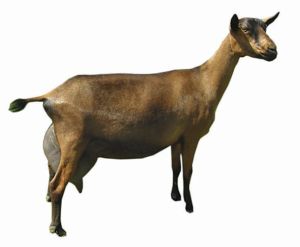 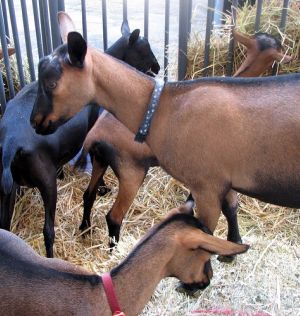 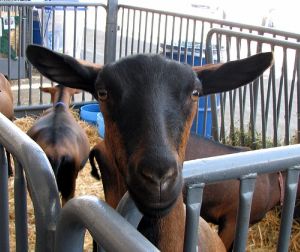 The Oberhasli is a breed of dairy goat from the district of the Canton of Berne in Switzerland. The name loosely translates as “highlander.” This breed is of medium size, vigorous and alert in appearance. Its color is chamois. Does may be black but chamois is preferred. Chamois is considered being bay, ranging from light to a deep red bay, with the latter the most desirable. A few white hairs in the coat and about the ears are permitted.

Markings are usually the following: two black stripes down the face from above each eye to a black muzzle; forehead nearly all black, black stripes from the base of each ear coming to a point just back of the poll and continuing along the neck and back as a dorsal stripe to the tail; a black belly and udder; black legs below the knees and hocks; ears black inside and bay outside. Bucks often have more black on the head than does as well as black whiskers and black hair along the shoulders and lower chest with a mantle of black along the back. Bucks frequently also have more white hairs through the coat than does. Occasionally a black Oberhasli appears as a result of recessive genes. The American Dairy Goat Association (ADGA) considers black does acceptable and will allow them to be registered, but black bucks cannot be registered. The face is straight. A Roman nose is not desirable.

This breed is still relatively rare in the United States, first appearing as imports in the 1920s. Until the early 1960s, it was not yet accepted as a breed by the ADGA. Because of its rarity and close similarity in type to the multicolored French Alpine goat, the Oberhasli registrations were lumped with the American Alpines. A small number of them were kept pure with records intact, and the breed was kept alive in America almost singlehandedly by Esther Oman, a breeder in California.

Photo by Jean / CC BY http://creativecommons.org/licenses/by/2.0/

Photo by Jean / CC BY http://creativecommons.org/licenses/by/2.0/