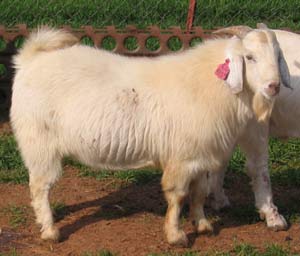 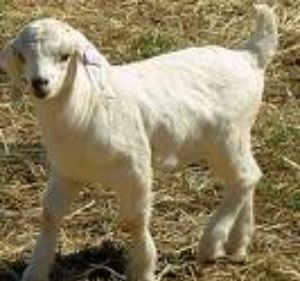 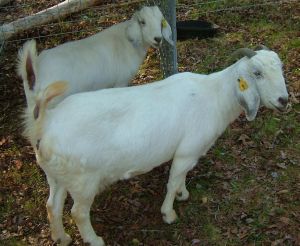 Visitors may find name of this breed spelled two ways, Savanna and Savannah.

The white Savanna goat breed was developed from indigenous goats of South Africa. Various farmers bred what was known as white Boer goats for a number of years in South Africa. One of the advantages of these white goats was the fact that the white color is dominant over most other colors. The other reason is that there is a big demand for white goats for slaughter purposes for various reasons. In 1957, Cilliers and Sons along the Vaal River became the best-known of the originators of this meat goat breed. On the rugged, harsh bush country where temperatures and rainfall can vary to a marked extent, natural selection played a big role in the development of these fertile, easy to care for, heat and drought resistant animals. These goats have thick, pliable skins with short white hair. The Savanna has excellent reproduction, muscular development, good bones and strong legs and hooves. Although these goats have white hair, they are selected for totally black pigmented skin, horns, hooves and all bare skin areas to avoid injury by strong ultra-violet rays.

The original Savanna importers in the United States maintained the natural selection development and continued the hardy meat goat breed. They noted that the half Savanna kid got up faster after birth and nursed quicker than their other goats. The Savanna breed is relatively new to the United States, having been imported in the late 1990s. The breed is a large framed, extremely well- muscled goat with white color containing a few black pigments found on the ears. The body characteristics resemble those of the Boer goat. The breed is very adaptable and is successful on extensive grazing, as well as on intensive pastures.

The Savanna is not a seasonal breeder, and mating can usually be done at a time that will ensure enough feed is available at kidding. The Savanna goat is a highly fertile and fecund breed, and a high twinning rate is generally achieved, even under less than optimal conditions.

Savanna wethers have a good growth rate and are an early- to medium-maturity type that produces carcasses with good confirmation.

The does have very good mothering ability and great milk production and produce fast-growing kids. Best of all, they require very little handling and care due to their disease resistance and limited hoof problems.

Picture of kid and does are from 2T’s Farm, North Carolina.