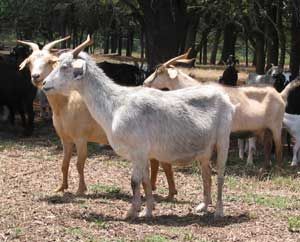 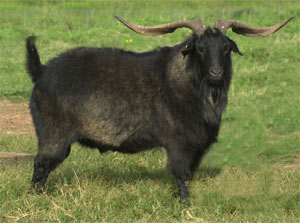 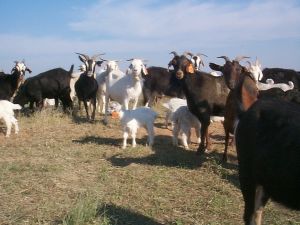 Spanish does with kids.

This breed is actually a type of goat that, on the whole, has been subject to some selection pressure for various production traits such as prolificacy and weight for age. The name is used loosely at times to refer to local or brush goats, but strictly speaking this is a misnomer. Although scattered across much of the United States, most Spanish goats are located in Texas, and breeders in that state have been responsible for its improvement and recognition. Spanish goats can be any color or color pattern. They are moderate in size and growth rate. They are especially tolerant of difficult conditions and forage well on local plants. Spanish does are prolific and produce enough milk for moderate growth rates of the kids. They are believed to be relatively tolerant of internal parasites. Spanish goats are very active and can be considered flighty. Survival rate is good. Because they have often been used in upgrading programs, availability of purebred stock may be limited in some regions.

This breed-type has developed through natural selection from goats first placed in Texas in the early 1540s by Spanish explorers. Survival of the fittest insured that the breed became hardy, good foragers and good mothers. Living in the wild gave an advantage to smaller stock because they needed less food. These goats have been referred to as “brush” goats in some regions because of their use in controlling brush. Some producers have improved the stock by selecting for better muscling, more milk or other criteria. These improved Spanish goats are much larger and meatier than the average Spanish goat. In terms of productivity, there is a lot of variation in the growth rate of Spanish goats. Selection is key to improving that trait. Producers appreciate the Spanish goats for their toughness and ability to thrive with minimal care. Spanish goats come in many colors and patterns. Nubian bucks have sometimes been crossed with them to improve size, milk production of dams and fleshiness of the kids. Their ears are somewhat pendulous but shorter than a Nubian’s. Many of them produce a cashmere undercoat in winter. Boer bucks have been crossed with Spanish does especially in Texas.

The Spanish type at one time provided a majority of the goat meat in the US and only upon introduction of the Boer goat and the reduction of the Mohair Incentive Program, did the Spanish start to lose their overall of the meat goat industry.