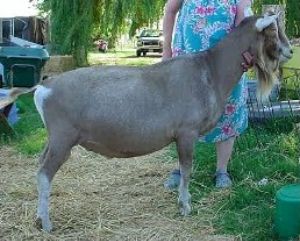 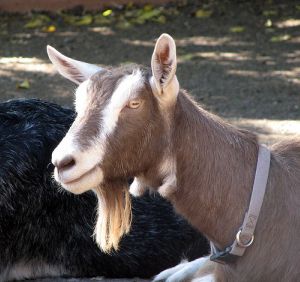 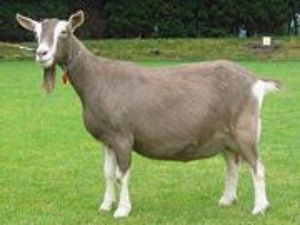 The Toggenburg is a breed of goat named after the region in Switzerland where the breed originated, the Toggenburg Valley. Toggenburgs are medium in size, moderate in production and have relatively low butterfat content — 2 percent to 3 percent — in their milk. They are also known as being the oldest dairy goat breed.

This breed is sturdy, vigorous and alert in appearance and does weight at least 120 pounds, or 55 kilograms.

The hair is short or medium in length, soft, fine and lays flat. Its color is solid, varying from light fawn to dark chocolate. They have distinct white markings of the following: white ears with dark spot in middle, two white stripes down the face from above each eye to the muzzle, hind legs white from hocks to hooves, forelegs white from knees downward with a dark band below the knee, a white triangle on either side of the tail, a white spot at the root of wattles or in that area if no wattles are present. Varying degrees of cream markings instead of pure white are acceptable but not desirable. The ears are erect and carried forward. Facial lines may be dished or straight, never roman.

Toggenburgs are known for their excellent udder development and high milk production, and have an average fat test of 3.7 percent.

Picture of buck is from Waiilatpu Toggenburgs, Walla Walla, Washington.