The relationships between feed intake, body weight, and milk production in lactating does is illustrated in Figure 2. Generally, milk yield peaks six to nine weeks after kidding, and feed intake does not peak until later. Thus, does are usually in a state of negative energy balance in early to mid-lactation. Therefore, body reserves – fat and protein – have to be used to make up for this energy deficit. The animal’s nutrient intake will not meet her demands until milk production has decreased to 60 to 80% of the peak. During the first month of lactation, goats may lose over 2 pounds of adipose or fat tissue each week to support milk production. An average weekly loss of adipose tissue in the second month is about 1 pound. 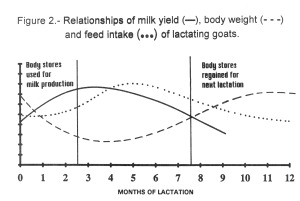 To increase doe productivity, producers should pay close attention to the lactation curves of does within their herds. Monitoring could help reduce feed costs and permit more accurate assessment of herd health. For instance, changing  does to feeding programs with lower nutrient densities should be based on milk yield and body condition. Since high-producing does direct more nutrients to milk, it is important to monitor their body condition closely to ensure that body reserves are replenished during late lactation or the dry period.

Diets should be sufficiently high in digestible nutrients to support the increasing milk yield. Based on the quantity of dry matter a doe can consume, the diet should be formulated in such a way that it meets her requirements. The doe should preferably be fed a completely mixed diet. Lactation diets should contain 60 to 75% total digestible nutrients (TDN) and 12 to 17% CP depending on the stage of lactation, level of production, and size of the doe. However, responses to different dietary CP levels have varied greatly among experiments. But it is agreed that milk production responses to high dietary CP levels are more likely with sources of protein that are not thoroughly degraded in the rumen – for example fish, blood, feather, and corn gluten meals – compared with ones that are extensively degraded by ruminal microbes – soybean meal and direct solvent-processed cottonseed meal. Furthermore, for most efficient utilization of diets high in CP, with much of the CP supplied by feedstuffs with protein that is extensively degraded in the rumen, the digestible energy concentration of the diet must be high – such as with a 60% concentrate level and high-quality forage.

Digestible energy and protein levels of diets are commonly increased by incorporating more grain and less forage. An increased TDN or digestible energy concentration in the diet can, however, lower the dietary fiber concentration below that required. For lactating dairy cows, minimum recommended dietary levels of neutral detergent fiber are 25 to 28% for cows of differing milk production potentials or in different stages of lactation, with at least 75% of this neutral detergent fiber from forages rather than concentrate or by-product feedstuffs. Minimum recommended levels of acid detergent fiber are 19 to 21%. From research conducted at the E (Kika) de la Garza Institute for Goat Research, it would appear that these fiber levels also can be applied to goats. We noted that lactating dairy goats producing over 7.7 pounds per day of milk utilized dietary energy most efficiently and maintained a milk fat percentage above 3% when dietary dry matter was 18 to 22%  acid detergent fiber. Lower dietary fiber levels can depress milk fat percentage and increase fat storage in the body of the doe or doeling at a time when nutrient partitioning to milk synthesis is desired. Therefore, it is important to observe the ratio of concentrate (i.e., grains, which are thoroughly and rapidly digested) to roughage – that is, forages that are less completed and more slowly digested – and not to exceed 60:40.

In addition to feeding more grain to increase the TDN concentration, or as an alternative, fat products may be added to the diet. There are at least three advantages to adding fat to the diet: 1) it may increase total energy intake and milk production in early lactation; 2) it may allow the dietary level of grain to be decreased, allowing more forage to be included in the diet without lowering energy density; and 3) it may improve the metabolic efficiency of lactation. However, unprotected fat sources should not be included in the diet at more than 3 or 4% since they can reduce fiber digestibility and can reduce consumption of the feed. High dietary fat levels also decrease Ca absorption. In accordance, somewhat higher levels of fat products that are inert in the rumen can be used, and many dairy cow producers include both types of fat sources in diets. In a recent experiment at the E (Kika) de la Garza Institute for Goat Research, a partially hydrogenated tallow product could be added to a lactating goat diet at up to 9% of dry matter without adverse effects. Economics should be a primary consideration, however, when making such dietary management decisions.

High-producing does in early lactation may require more protein than can be synthesized by ruminal microbes from non-protein nitrogen and protein sources that are thoroughly degraded in the rumen. However, there appears relatively less potential to temporarily meet this nutrient demand through tissue mobilization compared with use of body stores to provide energy needed for maximal milk production. Thus, feed sources high in protein that pass from the rumen without being degraded by ruminal microorganisms are frequently used in early lactation diets of high-producing dairy cows. Providing more amino acids to the small intestine will increase the supply of amino acids to the mammary gland, and as a result, can stimulate milk synthesis. The potential for such a response is due to several factors: 1) an increase in the amino acids that are limiting production; 2) providing more glucogenic amino acids, thus sparing glucose for lactose synthesis or to provide energy to the mammary gland; and 3) alteration of hormone levels that control milk synthesis. The efficacy of dietary inclusion of feedstuffs high in ruminally undegradable protein in lactating doe diets has not been adequately established. Thus, there is currently an experiment to address this issue under way at the E (Kika) de la Garza Institute for Goat Research.

Some producers allow access of high-producing dairy goats to a block of trace mineral salt to ensure adequate trace mineral nutrition. Completely mixed diets should contain appropriate amounts of calcium and phosphorus, typically with a ratio of 1.5:1 (Ca:P). A level of 0.4% P in the total diet is recommended. Because the sodium content of many feeds is inadequate to meet the need of dairy goats, the diet should contain added salt, with a level of 0.5% common.

Just because some feed is better for maximal milk production doesn’t mean it equates to maximal economic production. Feeding to the limit doesn’t guarantee a recovery of the associated economic costs.