Hoof care is a vital part of goat production. Hooves require regular trimming. Depending on the environment and nutrition, some animals need it more often than others, For example, animals in a rocky environment may need trimming less than those not exposed to rocks, and goats can sometimes have excess hoof growth — called founder — when given too much grain. They can also get hoof diseases like foot rot or foot scald.

Regular hoof trimming is necessary to keep hooves from over-growing and to keep animals walking properly. The overall goal of hoof trimming is for the bottom of the hoof to be flat and at the same angle as the hair line at the top of the hoof. To keep trimmers sharp and for ease of trimming, most of the dirt should be removed from the hoof before trimming, using a hoof pick or the tips of the trimmers. 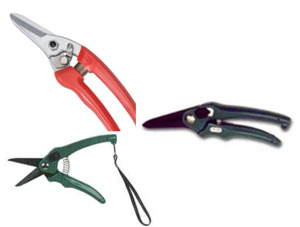 Some conformation, or structure, problems can be addressed with corrective trimming. For example, if an animal walks more on the outside half of the hoof than the inside half, the inside half could be trimmed shorter than the outside half to discourage rolling to the outside. Similarly, improper hoof trimming — especially not trimming regularly — can result in an animal walking as if structural issues exist when perhaps they do not.

Founder or laminitis: Laminitis is the swelling of the sensitive tissue beneath the hard walls of the hoof, causing pain, lameness, and eventually founder. Founder results when the hoof wall gets thick and overgrown, often with the toes turning up. In some cases, permanent hoof damage could occur. Possible causes of laminitis include sudden or extreme changes in the diet — for example, too much grain — trauma, or severe bacterial infections.

There may be no symptoms of mild laminitis other than the resulting overgrown hooves, often with the layers of the hoof wall separating from the tissue under it as the hoof grows out. In severe cases, the animals may grind their teeth in pain and walk on their knees. Hooves hot to the touch could also be a sign of laminitis. Prevention includes changing diets slowly, avoiding an overload of grain, and preventing or treating acidosis.

Hoof abscesses: These are caused most often by an injury to a hoof that allows the bacteria to get inside the hoof. The symptoms of abscesses are lameness from pain and, as the abcess works out of the hoof, swelling at the hairline just above the hoof. Treatment includes trimming and treating the infected area and using antibiotics if necessary. Proper hoof trimming can prevent abscesses.

Granuloma: Also caused by injury to the hoof, granulomas are round, red swellings of “proud flesh” that grow at the injury site and keep the hard part of the hoof wall from growing normally. They bleed easily. Lameness from pain and odd shaped hooves or hoof walls are symptoms.

Shelly hoof: The white line — where the soft and hard part of the hoof meet — of the hoof can break down due to poor hoof care, and a pocket can form that may fill with dirt. Under certain conditions, infections can result, but usually no lameness or pain is associated with shelly hoof.