Effect of Kidding Season on Nutrient

Nutrient requirements of does change dramatically with stage of production. Requirements increase dramatically the last six weeks of gestation due to increasing fetal growth. They remain high in early lactation (kidding occurred on week 20 in chart). During the month prior to kidding and for the following three months, assuming weaning at 12 weeks of age, the doe will consume nearly as much nutrients as in the remaining eight months of the production cycle. Thus, during that time it makes sense to supply nutrients from an inexpensive source, typically pasture. The cost of providing the same nutrients as hay is more than twice that of pasture, and supplying through purchased feeds may be four to five times greater than for pasture.

Kidding should be planned for a time when pasture is rapidly growing. This period corresponds to late spring for pastures comprised of warm season forages such as bermudagrass or native range, browse and forbs. But it could be either fall or early spring for cool season grasses such as ryegrass, wheat, orchard grass and fescue. Cool season grasses usually produce less forage per acre than warm season forages but generally are higher in energy and protein. The accompanying figure shows the relative production of cool and warm season forages for central Oklahoma. Consult a local pasture extension specialist or livestock extension specialist for local forage growth patterns. Rapidly growing pasture is high in protein and energy. A major consideration in determining the date to kid is level of forage production at that time. However, there are other considerations in selecting kidding date, such as parasites and market opportunities. Some markets provide a substantial price premium from kidding at a specific time of the year, such as producing prospect show wethers or registered animals. However, it may take a considerable market premium to cover the cost of purchased feed, so general reliance on pastures and forages is best. 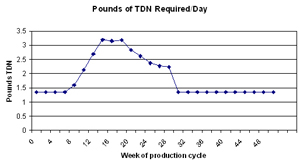 Pounds of TDN Required per Day. 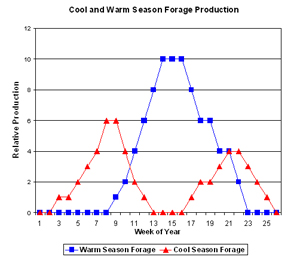