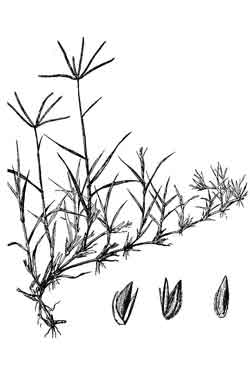 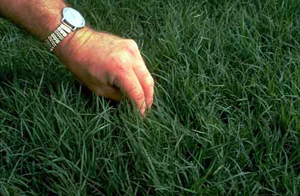 Bermudagrass is well adapted in the Southeast except on poorly drained soils. It is particularly well adapted to sandy soils and grows well on deep sands. However, it is subject to winter injury in the Appalachian mountain areas, especially the upper mountains. Bermudagrass spreads by rhizomes, stolons and seed in some types. The general growth period is April to October. Peak months of production are June, July and August. Yields range from 3 to 6 tons dry matter per acre. It is difficult to grow a summer legume with bermudagrass, but it is possible to overseed it with crimson clover, red clover, ladino clover, cereal grains or annual ryegrass for winter or early spring grazing. Quality is moderate (60 percent to 63 percent digestible and 12 percent to 16 percent crude protein) if kept immature and leafy, or under 4 inches. Stocking rate needs to be high because of its high productivity to keep it vegetative, as compared with switchgrass and gamagrass. Up to 60 goats per acre can be stocked, but the actual stocking rate may depend on production, utilization rate, intake rate of the goats and length of the grazing season.

Winter hardiness is a very important trait to consider. There are differences in the degree of winter hardiness of different cultivars, and these differences can be critical for stand persistence. The common cultivars with best-proven winter hardiness are Greenfield, Guymon and Wrangler; whereas the hybrids with best- proven cold tolerance are Midland 99, Midland, Tifton 44, World Feeder and Lancaster. Tifton 44 is hardier in the winter than Coastal and Tifton 85, the latter growing best in the coastal plains.

Bermudagrass hybrids are similar in general appearance to common bermuda but are taller and usually yield more forage. Unlike common bermuda, which spreads by seed, hybrid bermudagrass cultivars produce no live seed, spreading instead by rhizomes and stolons.

Therefore, hybrid bermudagrasses must be established from sprigs. Do not let sprigs dry in sun or wind before planting by using dormant plants in February, March and early April. Sprigs can also be planted in late spring and summer whenever moisture is ample. When sprigging Coastal or Tifton 78, use at least 10 bushels of sprigs per acre in rows 3 to 4 feet apart, and sprigs spaced 2 to 3 feet in the row. Tifton 44 is slower to establish than Coastal; therefore double the sprigs per row and cut in half the row spacings, to about 40 bushels per acre. Herbicides that control germinating seeds are very effective for newly sprigged pastures.

With commercial planters, hybrid bermudagrass cultivars may be planted in 18- or 20-inch rows by off-setting and going over the field twice. Use from 40 to 75 bushels of sprigs per acre. On farms where sprigs are plentiful, stands can be established by broadcasting liberal quantities — 75 to 100 bushels per acre — in late winter and disking in. One bushel equals approximately 1.25 cubic feet and contains about 1,200 sprigs.

Common bermuda is established by seeding around corn-planting time into a prepared seedbed. Acceptable stands are generally obtained in six to eight weeks. For both hybrid and common bermudagrass, care should be exercised to control weeds, particularly crabgrass in the first year, by cultivation, mowing or careful grazing. After establishment, graze when 4 to 10 inches tall. Close grazing will reduce yields of bermuda in the first year. After the first year, graze when 6 inches, back to 1-inch stubble. Harvest hay at a height of 12 to 15 inches or at four- to six-week intervals during the growing season. Bermudagrass should go into the winter with 3 to 4 inches of growth to serve as insulation against winter damage. Burn or flail off the residue in late February or early March. It is necessary to graze or mow very closely and disk lightly in order to establish legumes after sod has become thick.

A cold-tolerant hybrid variety Ozark bermudagrass was released jointly by University of Missouri, University of Arkansas and the Noble Foundation.