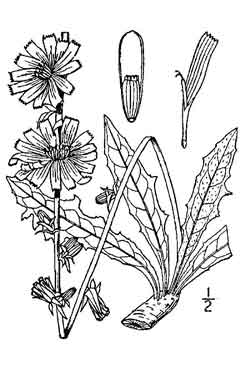 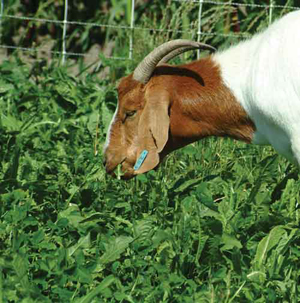 Forage chicory is a perennial which is suited to be grown on well-drained or moderately drained soils having medium to high fertility and a pH of 5.5 or greater. Chicory has good seedling vigor and a relatively deep taproot which provides tolerance to drought. It provides both spring and summer forage growth for goats. Unlike most forage crops, it is an herb rather than either a grass or a legume. Chicory produces leafy growth which, if managed properly, is similar in nutritive value and mineral content to alfalfa or cool-season grasses. During the winter, forage chicory is a low-growing rosette plant with broad leaves. At this stage it looks very much like dandelion. With warm temperatures in the spring, it produces large numbers of leaves from the crown. After the establishment year, a few flower stems begin to develop in late spring from the crown and the shoots will reach heights of 6 feet if ungrazed. At this point it resembles curly dock except that it has blue flowers and a different type of seedheads. New Zealand led much of the breeding for improved forage characteristics of the variety ‘Puna’ marketed in the United States.

Chicory production and the life of the stand (5 to 7 years) is optimized under control grazing management. Depending on time of year and climatic conditions, a rest period of 25 to 30 days between grazing is best for chicory persistence and performance. A stubble height of 1.5 to 2 inches should remain after grazing or cutting. Spring-seeded chicory can be grazed after 80 to 100 days, depending on climatic conditions. In mixtures which include chicory, a cool season legume such as white clover is usually included because of its nitrogen fixing capability. Germination of stored seed can decline rapidly, therefore seed should be used promptly and not stored from year to year. Chicory also contains tannins that have been shown to reduce worm burdens in deer in New Zealand.