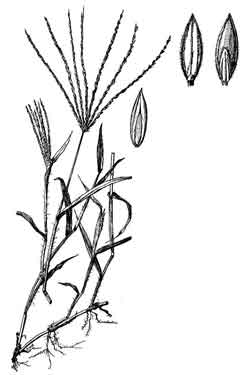 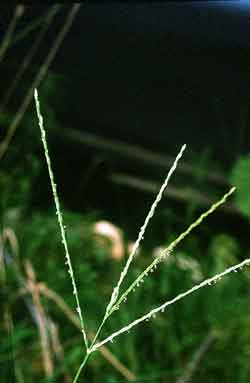 Large or hairy crabgrass is widely distributed and well adapted to most soils but does not tolerate water-logged conditions. It is drought tolerant and responds to moisture more quickly than do many summer grasses. Crabgrass has a semi-erect growth with prostrate stems which often root at the nodes when in prolonged contact with moist soil. It is a warm-season annual that volunteers readily from seed and is very competitive with other grasses, especially with slower-growing species.

It produces good growth from June through September. Yields range from 3 to 5 tons per acre. Crabgrass is a highly palatable plant and provides higher quality forage than bermudagrass. Digestibility is usually 5 percent to 8 percent higher than bermudagrass at equivalent stages of maturity, ranging from 62 percent to 72 percent. Crude protein ranges from 7 percent to 18 percent, depending on stage of growth and nitrogen fertilization.

Crabgrass can be planted into prepared seedbeds immediately after the last spring frost. Disking or other tillage during the dormant season of fall and winter appears to be essential for productive reseeding stands. Breakdown of the residue from the previous year is important because crabgrass is self-toxic. A procedure for double cropping is to cut or graze crabgrass completely by September 1. Then, disk, drag and plant cereal rye as soon as possible, and graze cereal rye to completely use growth by about April 15 to May 1. If crabgrass volunteers in the pasture before May 1, or the end of grazing cereal rye, do not till the pasture. If it is not present at rye graze-out, disk and drag the pasture and as soon as crabgrass is up and beginning to tiller, apply 70 to 80 pounds of nitrogen per acre. Repeat nitrogen application in late June or early July. Start grazing when crabgrass is about 4 inches tall. Because the stand must be allowed to produce seed sometime during the summer, controlled-rotational grazing is a good method.