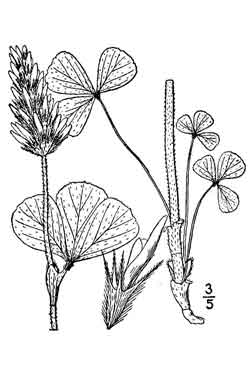 Crimson clover is adapted to most soils, except dry, sandy, and very poorly drained soils. It is well adapted to upland loams and low-lying medium, well-drained soils. In general, it is preferable to other winter annual legumes except hairy vetch, which usually proves superior on deep, sandy soils. Because crimson comes on earlier than hairy vetch or annual medics, mixtures of these produce steadier forage supplies through the winter and spring. Crimson clover is an erect winter annual with shallow tap root. Its general growth period is October to June. The peak months of production are November, March, April, and May. Crimson clover matures and dies in early June, with 75% of its total production being March to May. Its yields average 1 to 2 tons per acre.

Crimson clover is frequently seeded with cereal grains and/or Italian ryegrass. It is also no-till planted into bermudagrass sods to extend the grazing season. Seeding crimson clover overseeded in the fall in sericea lespedeza pastures will provide grazing in the spring and not damage the lespedeza if the clover is grazed closely in April and May. Crimson clover is of very high quality (70 to 75% digestible with 16 to 22% crude protein) when immature, but declines (58 to 68% digestible) with maturity. It is a good source of phosphorus, calcium, and magnesium.

Inoculation is usually necessary at planting. Crimson may be grazed to 2 to 4 inches when growth reaches 6 to 8 inches. Natural re-seeding of some cultivars can be accomplished by managing to permit some plants to form seeds in late May to early June. The perennial companion crop will have to be closely grazed in the fall. Graze closely in early spring if seeded with warm-season perennial grasses of legumes because crimson is highly competitive with the perennial in early spring.