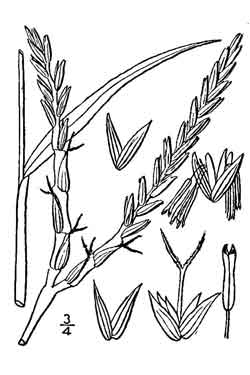 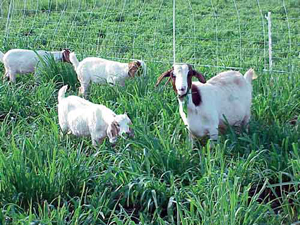 Eastern gamagrass s native to most of the eastern half of the United States. Eastern gamagrass grows on well-drained uplands but also persists on wet-natured soils. It is a long-lived perennial that produces 4 to 6 tons of hay per acre from two to three harvests or several grazing.

Eastern gamagrass is a tall, erect bunch grass that grows in large clumps from 1 to 4 feet in diameter. It spreads by short rhizomes and produces seed from July to September on stems 3 to 9 feet tall. Its growth cycle is similar to that of switchgrass. Eastern gamagrass is palatable, nutritious, and readily eaten by all types of livestock. Young, actively growing leaves are 65 percent to 72 percent digestible and 12 percent to 18 percent crude protein. Goats are somewhat reluctant to eat Eastern gamagrass at first because short, fine, spiny hairs grow on the leaf edges that may produce some mechanical injuries in a few cases.