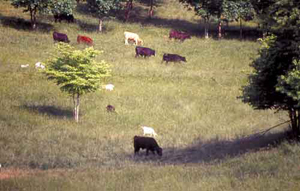 The differences in feeding behavior among cattle, sheep and goats uniquely fit each species to the utilization of different feeds/forages available on a farm. These differences should be considered in determining the best animal species to utilize a particular feed/forage resource. Feeding behavior is also important in determining whether single or multi-species will best consume available plant materials. Most studies indicate greater production and better pasture utilization are achieved when sheep and cattle or sheep, cattle and goats are grazing and browsing together, as opposed to grazing/browsing only sheep, goats or cattle alone. This is especially true where a diverse plant population exists.

Because of the complimentary grazing and browsing habits, the differential preferences and the wide variation in vegetation within most pastures, one to two goats can be browsing with every beef cow without adversely affecting the feed supply of the beef herd. The selective browsing habits of goats in combination with cattle will eventually produce pastures which are more productive, of higher quality, and have few weed and brush problems. 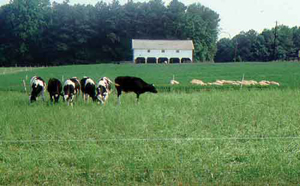