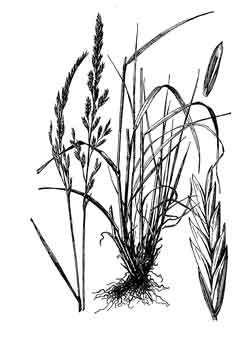 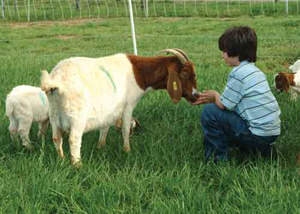 Tall fescue is adapted to all soils except the dryer sands and grows well on soils too wet for orchardgrass. Tall fescue is tolerant of soil acidity and is relatively tolerant of drought. The presence of an endophyte fungus, or Neotyphodium coenophialum, found in more than 90-percent of the old Kentucky 31 tall fescue, has been associated with persistency. Persistence of endophyte-free and MaxQ tall fescue, which contains a novel endophyte fungus not detrimental to animals, is not yet known. These varieties have been observed for only three years in North Carolina while being control-grazed by goats.

Tall fescue is a semi-erect, bunch-type grass, with short rhizomes. It spreads very slowly by rhizomes. Tall fescue remains green throughout much of the year in the Southeast. The peak production months are March, April, May, September, October and November. Tall fescue makes fair growth in mid-summer when fertility and moisture are ample but frequently becomes dormant after 14 to 21 days of no rain. Yields range from 3 to 5 tons per acre. Tall fescue grows well with ladino clover and red clover. Tall fescue is high in quality — 70-percent to 80-percent digestible — when immature and leafy, but declines to 55-percent to 60-percent digestible when allowed to head.

The presence of the endophyte fungus found in most of the old Kentucky 31 tall fescue pastures has been associated with beef cattle health disorders and poor animal performance. Adding ladino clover and managing these pastures to favor other grasses such as Kentucky bluegrass, orchardgrass, crabgrass and common bermudagrass will dilute the toxic tall fescue. Other strategies to eliminate toxicity problems are not grazing infected fescue during mid-summer by using warm season alternatives and not grazing below a 2-inch stubble.

Pure stands of tall fescue can be stockpiled for deferred grazing in late fall and early winter by accumulating growth in August, September and October on a portion of the acreage. The accumulated forage should be strip grazed heavily in November, December and January as long as supplies last.