Kidding may occur on pasture, or you may need to provide does with a clean, dry, well-ventilated shelter, depending on the weather in your area and your preference. It is wise to watch animals carefully, in case they should require assistance. Straw or pine shavings, or an inexpensive hay, can be used for bedding in shelters, if desired. Pregnant animals will get an enlarged udder starting one to six weeks prior to kidding. Some signs that parturition, or kidding, is approaching include hollowness on either side of the doe’s tail, the doe isolating herself from the rest of the herd, and an enlarged udder and teats that begin to fill with milk.

At two weeks prior to kidding, the muscles of the ligaments on both sides of the doe will begin to soften and relax. During the last three to four days before labor, the udder will appear quite large as it fills with milk. Does that kid for the first time may not show this development until two weeks or more after kidding. One to two days before labor, the teats become enlarged and look full of milk; the does will begin to show signs of nervousness: pawing at the ground, acting restless, and lying down. The doe will also expel a thin mucous discharge from the vulva, which will gradually become thicker as parturition approaches. The last 12 hours of labor may consist of continuous bleating sounds by the doe. The tail may be straight out or slightly elevated. The first several vertebrae of the spine in front of the tail head may appear to stand higher and taller than usual.

A normal delivery usually takes five hours. Cervix dilation (which you cannot see) usually requires four hours, and then one hour is required for the delivery of the offspring. The kid should be right side up with the front feet first, with legs extended and the head lying between the knees and pasterns in a “diving” position. After the water sac breaks, the doe should start to give birth within 30 minutes to one hour. If the doe is pushing very hard for longer than 30 minutes and a water sac or kid does not appear, it may be necessary to assist the doe yourself or contact a veterinarian for further assistance. Generally, if the doe is still in active labor and is pushing after having a kid and does not pass placenta or another kid within 30 minutes to one hour, assistance may be needed. Some does may take longer between kids without problems. If they are up cleaning a kid and appear comfortable, longer than one hour may be acceptable. Goats may have three, or rarely, more kids. The process will repeat with each kid.

When the kid is born, try to let the cord break naturally, but if the sac is not broken, break it for the doe. Newborn kids are stimulated by the doe licking it clean. Normally, kids begin to vocalize as the doe cleans them. Normal kids attempt to stand within a few hours after birth and look for the udder to nurse. Respiration in the kid is stimulated by the doe licking the kid. If the kid appears lifeless, vigorously rub the kid with a towel to stimulate respiration, and clean out the mucus from the nose and mouth with a finger or soft cloth. Placing a piece of straw up the nose, which will trigger a sneezing reaction, can also help clear the airways. If the kid is still having problems, giving it short, firm, but gentle, compressions with the fingers in the middle of the heart until it cries may help. Once the doe has kidded, make sure she has shed her placenta. Contact your veterinarian if the placenta has not detached after 12 to 18 hours.

For more information about kidding, see: Kidding Management or Getting Ready For Lambing and Kidding.

Abnormal presentations include a kid position that is fully breached, with the buttocks or back feet appearing first. If the back feet appear first, no assistance is needed. If the buttocks/tail is presented, the kid can be pushed back some, the back feet can be eased up into the position shown below (protect the uterus from puncture of feet using your hand), and kidding can be assisted if needed after that.

A person assisting the doe should trim his or her nails, remove all jewelry (rings), and put on latex gloves or thoroughly wash his or her hands. Antibiotics may be needed for does that have been given assistance, depending upon the severity of the problem. 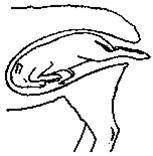 Another abnormal position may include the head presenting itself, with one foot visible, and the doe straining unproductively. See below for additional breached positions:

Care around the time of birth (neonatal care)

After birth, clean the mucus away from the nose, mouth, and throat. Weigh the kid, tag the ear, and dip the navel cord in 7-percent iodine to prevent navel joint disease. Make sure each kid receives its mother’s first milk (colostrum) within the first 24 hours after birth (within the first one to four hours is best). The first milk is rich in antibodies that helps the kid fight diseases. The sooner the kid nurses, the more antibodies the animal can absorb. After 24 hours, the kid’s ability to absorb antibodies from the colostrum is minimal, and shortly after that, none can be absorbed. In the case of orphans, provide colostrum from another doe that has just given birth, keep frozen colostrum on hand, or use a good colostrum replacer or supplement. Efforts can also be made to force a doe that has given birth to a single kid to adopt an orphan.

The adoption process between animals may not be as easy as it seems. First, try isolating the adopting parent in a small pen with the orphan. Hold or securely tie the doe, allowing the kid to nurse the doe several times during the day, or use a type of grafting gate, available commercially at several equipment websites (or make your own). Sometimes, using a smelly menthol-type rub in the doe’s nose, on each kid’s face, rump, and belly can make all the kids smell the same. Hopefully, after seven to 10 days of the kid(s) nursing the doe, she will think the kid(s) is hers and decide to keep it as her own. If this process does not work, stick with bottle feeding. If there are several orphans, a kid milk feeder can service up to 10 orphan kids at one time.

In goats, neonatal deaths usually occur when the doe is in poor condition during the last third of pregnancy (50 days) and the kids receive inadequate consumption of colostrum during the first six hours of life. Neonatal deaths are also higher during extreme weather conditions.

Kids should be provided solid food within the first three weeks of life to stimulate the rumen development, and for early weaning and forage consumption. Provide feed with at least 16 percent crude protein-free choice. Some producers do not creep feed because of the inconvenience or added expense. Because mothers need extra feed for lactation, if the feeder is low enough for kids to eat, some mothers will let the kids share their food.

At six weeks of age, and again three to four weeks later (as per vaccine label), give the kids a Clostridium perfringens vaccination and tetanus vaccine (toxoid). If wethers are to be sold, castrate them by at least 45 days old. Don’t wait too long to castrate males because it may be more painful to the animal and there may be greater chances for infection, especially if open castration procedures are done. If the males are not castrated, wean them and remove them from the females before they reach four months of age to prevent accidental pregnancies.

Criteria for Culling Does (Removing the Animals from Your Farm):

To make genetic improvements in breeding stock, replace 10 percent of the lowest performers with better quality animals annually. Does selected for replacements should have the following characteristics:

The buck should be replaced in the herd or flock every three years to prevent inbreeding and to make genetic improvements in the breeding stock. Other reasons for culling will include low kidding rates, low libido, or consistent health issues. Select replacement bucks that are born from twins, healthy, reproductively sound (tested by a breeding soundness exam, or BSE), structurally sound, have a large scrotal circumference (related to high fertility rates), high growth/average daily gain (ADG), weaning weights, and are easy to manage.

Images are provided under the © Queen’s Printer for Ontario, 1998.