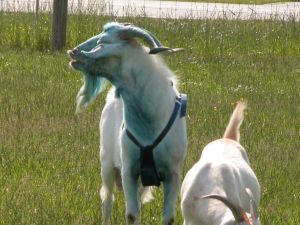 The male goat is called a “buck” or “billy.” If he is castrated, he is called a “wether.” Male goats up to 12 months of age are sometimes referred to as “bucklings.” Adult male goats can weigh anywhere between 100 to 350 pounds, depending on their breed, health and nutritional status. Although they can come into puberty and breed does as early at 4 months of age, waiting until a buck is a year of age to start using him for breeding is best. The number of does a buck can breed during the breeding season is often referred to as “Buck Power” (Noble, 2004).

At 1 year of age, the buck  should service no more than 10 does at a time (in one month). When he is 2 years old, he should be able to service 25 does at a time. At the age of 3 and older, he can breed up to 40 does at one time, as long as his health and nutritional needs are met. The number of does a buck can service at one time also depends on individual sex drive of the buck, the terrain of the land and if he is managed by a hand- or pasture- mating system. The buck has the greatest genetic impact on the herd and should be well taken care of at all times.

Day length has an effect on reproduction in the buck and the doe. Bucks have the highest libido (sex drive), fertility, and semen quality and volume in late summer and fall, the same time that of the doe  (Senger 1984; Wildeus, date unknown). As the photoperiod, or day length, gets longer, less sperm is made and more abnormal sperm cells are found in the semen. During the fall, the endocrine system also increases levels of the sex hormones, testosterone and luteinizing hormone (Ritar,1990). 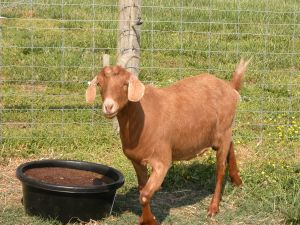 The female goat is called a “doe” or “nanny.” Up to the age of 12 months, she is sometimes referred to as a “doeling.” The doe can reach puberty between 4 to 12 months of age, depending on the breed, season of birth, level of feeding/nutrition, and overall health status. Under-feeding can lower her chances of getting pregnant and having kids and can also reduce milk production after having kids.The genetic makeup of the animal also determines when puberty occurs in the female. Puberty is reached when the female exhibits her first heat (estrus) and ovulation.

Estrus, or heat, is the period in which the doe will stand and allow the buck to breed her. This phase of the reproductive cycle may last between 12 to 36 hours. The period from one heat cycle to the next is referred to as the estrous cycle. In goats, the estrous cycle occurs every 18 to 24 days, or 21 days on average. Does that are in heat may exhibit signs of mucous discharge from the vulva, swollen vulva, bleating, frequent tail wagging, pacing down the fence line and standing in heat. The doe can be bred when she has reached 60 percent to 70 percent of the average adult weight for her breed (80 pounds for an average Boer doe for example). Does that are bred too early may have problems during kidding (dystocia – kidding difficulty), and/or their future reproductive performance may be harmed.

The gestation period, or length of pregnancy, of the doe ranges between 145 to 152 days, or 150 days (5 months) on average, and under normal circumstances, the doe can have multiple births (twins, triplets and rarely, more). For more information on reproduction, you can return to the table of contents at: http://www.extension.org/pages/19565/goat-reproduction.