In pregnant does, pregnancy can be divided into three stages: Day 0 to 50; 50 to 100; and > 100. Up to Day 100, fetuses develop but little growth takes place. During this time, does requires very little additional nutrients above those needed for lactation, maintaining body weight, activity, and growth in the case of doelings. Figure 1 illustrates the dramatic increase in nutrient requirements a doe experiences in the last 50 days of pregnancy. Most fetal and mammary gland growth takes place in the last trimester, elevating does’ nutrient requirements considerably. Especially with twins, triplets and quadruplets, the space fetuses occupy in does’ abdomens increases and consequently decreases space available for feed. During this time, does must be fed diets with a high concentration of digestible energy. Failing to increase the energy intake of the animal may lead to metabolic disorders such as pregnancy toxemia, also known as pregnancy disease or ketosis. 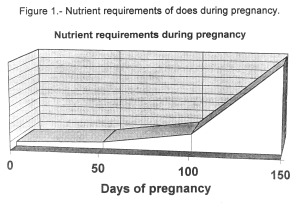 Ketosis is a common metabolic problem in early lactation and particularly late gestation with multiple fetuses. Ketosis results from an inadequate supply of glucose to maintain a normal blood glucose level. The requirement for glucose and glucose precursors is high in late gestation due to fetal development demands; demand are also high in early lactation due to metabolism of fatty acids from adipose tissues in support of milk synthesis. In the last six weeks of gestation, the dietary grain level should be slowly increased to increase the glucose supply for fetal growth and prepare the animal to consume a mixed grain-forage diet in lactation. Never abruptly shift animals from a high forage to a high grain diet just because nutrient requirements have increased. A drastic change can result in reduced feed intake, low milk fat test, large decreases in body condition in early lactation, reduced milk flow peak, poor lactation persistency, abnormal manure, and an increased incidence of metabolic diseases such as acidosis.

Based on research at the E (Kika) de la Garza Institute for Goat Research, the recommended daily allowances for does in the last 2 months of gestation should be at least 10% crude protein (CP)on an as-fed basis and no more than 20% above the energy recommendation of the National Research Council. Although there appears to be little influence of diet on kidding traits, care must be taken in feeding late-pregnant does to avoid complications arising from metabolic disturbances. Goats should have adequate fat stores at kidding to achieve high milk yields in early lactation. Overfeeding concentrates does not enhance milk production and can be detrimental. High forage intake in late gestation promotes high forage intake in lactation.

During the three to four weeks preceding kidding, does should be acclimated to any new feedstuffs to be used in lactation. The dietary grain level should be increased slowly if only forage was being consumed previously so at least 1% body weight of grain on a dry matter basis is being consumed before kidding. However, this level should be varied with age, body condition score, number of fetuses and milk production potential of the goat. Ideally, forage quality should be high, such as including alfalfa hay. Increased energy density in the diet will stimulate development of ruminal papillae, necessary for high feed intake and nutrient absorption during lactation. The increased level of grain feeding also limits fat mobilization and associated metabolic problems. This is especially important because of a decrease in feed intake that occurs in the last two to three days before kidding. In addition, increasing dietary grain level and digestible energy concentration in this transition period can minimize problems with mastitis. This is due to the nutrition (e.g. amino acid, trace mineral and vitamin status) x immunity interaction. Requirements for trace minerals in the latter part of the dry period are thought to be elevated in dairy cows, and this may be the case for dairy goats as well.

Nutrition in the transition period affects the incidence of milk fever in early lactation, although this condition is less common in dairy goats than dairy cows. Parathyroid hormone must be produced and active for mobilization of adequate bone calcium (Ca) to support milk production in early lactation and maintain adequate blood Ca levels. To achieve this, dietary Ca levels should not be high in late gestation; therefore, feeding legumes that are high in calcium should be minimized or avoided if possible. In addition, feeding high dietary ratios of acidogenic (NH4Cl and MgSO4) to alkalogenic (NaHCO3, KHCO3, and MgO) minerals to dairy cows helps maintain proper blood pH in this period so parathyroid hormone activity is high: this is expected to apply to dairy goats also. High dietary potassium levels should be avoided in this period.

Although iodine and calcium deficiencies have been observed to cause fetal deaths, vitamin A deficiency is most likely to cause fetal deaths. Especially during or after a dry summer when grass and hay may lack adequate amounts of vitamin A, attention is required to meet animals’ requirements. A phosphorus (P) deficiency is more likely than a Ca deficiency in grazing goats because of the relatively low phosphorus concentration in forages. It is important to be aware of possible soil mineral deficiencies in the area where your animals are grazing or where your hay is produced, because this will influence the specific content of that nutrient in locally-produced forages.