Time is needed for goats to sustainably control brush and weeds. Brush and weeds are not as well adapted to repeated defoliation as are grasses.  Repeated defoliation stresses these plants and reduces carbohydrate reserves. This stress makes the plant more subject to damage or death through insect and disease attack. Finally, when the root carbohydrates are depleted, the plant will die.

Stripping of bark by goats, such as seen in honey and black locust and red cedar, will kill woody trees. Some annual plants are controlled through the consumption of seed stems as mentioned previously. However, for most plants there is an accumulation of seeds in the soil (seed bank) that will sprout back for several years. If control continues, the number of sprouts will decrease yearly as the seeds lose their viability. Some plants that have “hard seed” such as vetch and lespedeza will remain in the ground and continue to sprout for more than 10 years. One study with sericea lespedeza showed that grazing by goats caused more seeds in the seed bank to sprout, depleting the seed bank faster.

As expected, goats are much more effective at controlling unwanted vegetation if they are utilized early in an infestation, providing quicker control. Usually, however, vegetation problems progress to the extreme before control is attempted. Woody species can be more readily controlled at heights of less than 10 feet than at heights of 20 feet or more. At the latter heights, control may require an extended period of time and/or pretreatment such as burning or chaining. 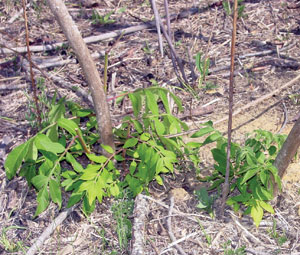 Some producers may choose to maintain brush as a renewable feed resource for their goats. To achieve this, don’t allow goats to defoliate brush during the first month of spring growth, do not allow goats to defoliate it severely at any time, and allow 8 weeks recovery between defoliations. To fully recover and develop carbohydrate reserves for future regrowth, do not defoliate the month prior to expected frost.

Conversely, if the goal is to kill brush, it should be defoliated early in the spring, repeatedly defoliated throughout the growing season not allowing it to recover, and grazed late in the fall. This is typically what happens under continuous grazing management.