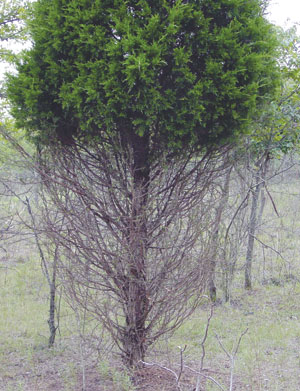 It is necessary for goats to consume a plant in order to control it. Therefore, the question is, “Will goats eat the plant or target species?” This is not a simple question to answer because many factors affect what plant species a goat will consume.

The greatest factor in determining what plant species a goat consumes is what they learned to eat from their mothers. Goats can also learn from their peers, although to a much lesser extent. The second major factor relates to year of birth in that animals born in a year in which there was a greater availability of a particular weed species, usually due to climatic conditions, will have learned to eat more of that species. These two factors account for different groups of goats having different dietary preferences.

Dietary preferences also change with time of year and location. In central Oklahoma goats eat significant amounts of red cedar only during the winter, but in Kansas and Missouri goats will consume red cedar in the summer. In many cases, goats will walk past a certain plant species for weeks and then one day decide that it is time to eat that species. Also, at some locations goats will eat a given species, but the same goats at another location will not consume that species, presumably due to differences in soil and climate factors affecting plant palatability. Thus, it is difficult to predict whether goats will consume a specific weed at a specific location. 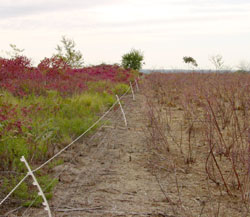 Goats will not provide the rapid control or eradication of undesirable vegetation seen with herbicides. However, one should see evidence of the target plant species being consumed by the end of the grazing season. Often, highly preferred vegetation may be grazed into the ground by summer’s end. If goats haven’t grazed a plant by mid-summer, it is possible that they will later in the season. If goats are not consuming the target plant species, there are two possible remedies. The first is to find some goats that eat that plant species and add them to the herd to teach the current animals to eat it. The second is to train some animals to eat that plant species. One researcher has been somewhat successful in training animals to eat weedy species and her techniques are located at www.livestockforlandscapes.com. Trained animals also taught peers to eat the targeted plant. Further, goats will not penetrate tall vegetation readily. Mowing strips through dense vegetation will help goats to penetrate it.