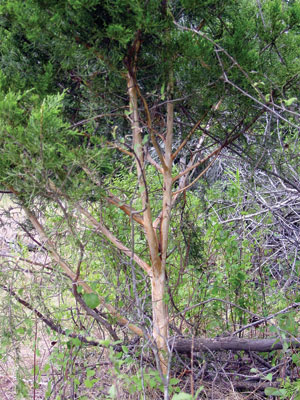 Eastern red cedar (Juniperus virginiana) – The time required for control varies with location. At some locations, goats have found this species readily palatable and defoliated and debarked it in the first year or two of grazing, resulting in good control. At other locations, the goats had a much lower preference for it but consumed more in the winter. Even in these areas, as long as goats had access to the cedar during the winter, it was mostly controlled within five years except for the very largest trees.

Elm (Ulmus spp.) – Goats consumed leaves and produced a browse line. They controlled sprouts but did not control trees over 12-feet high.

Greenbriar (Smilax bona-nox) – Goats aggressively consume the leaves of greenbriar and may consume some of the stems. They are able to control greenbriar within three years.

Hackberry (Celtis occidentalis) – Goats consumed hackberry and left a browse line. They controlled sprouts but did not control trees over 12-feet high.

Honey locust (Gleditsia triacanthos) and black locust (Robinia pseudoacacia) – Goats readily control these species in a year or two because they not only eat the leaves, but pull strips of bark from the trees to eat. This will kill even very tall trees.

Osage orange (Maclura pomifera) – Also called hedge apple or Bois d’Arc. Goats readily consume the leaves and will put a browse line on the trees. However, goats do not debark trees and therefore do not provide control of large trees. Some goats will consume the fruit of the trees, called horse apples or hedge apples.

Poison ivy (Toxicondendron radicans) – Goats have a high preference for poison ivy and it is one of the first woody species to disappear when goats are introduced into an area.

Persimmon (Diospyros virginiana) – Goats may browse and control persimmon on some sites, but on others, it is poorly utilized.

Rose species, including multiflora rose (Rosa spp.) – Goats readily defoliated these plants and reduced plant vigor the first year. However, three or more years of grazing were required to fully control this species.

Sand plum (Prunus augustifolia) – Goats love sand plum and will immediately defoliate it when available, resulting in quick loss of vigor. However, the plant has good carbohydrate reserves in the roots and will continue to produce foliage for several years. This plant is readily controlled in three years.

Shinnery oak (Quercus havardii) – Goats consumed shinnery oak and gradually controlled it. One of the benefits of using goats was that plant nutrients were returned through the goat manure, increasing available nitrogen and phosphorus in the soil, facilitating establishment of grasses. Control is a long-term effort, requiring more time if the stand is more mature. A study in Texas indicated that quicker control could be obtained if the shinnery oak was first mowed down, the goats then readily consumed the sprouts and maintained control of the species.

Smooth sumac (Rhus glabra) – Control of this species varied with location, which must be the effect of plant palatability and the preference goats have for the species. At several locations, plants up to 12-feet tall were killed in one to two years, whereas at one location goats refused to consume the species. At the locations where goats controlled the species, they consumed not only the foliage, but debarked many of the stems, hastening the death of many plants.

Winged sumac (Rhus copulina) – Goats seem to have a greater preference for winged sumac than smooth sumac. They readily consume the foliage and may consume the bark, resulting in control in two or three years. 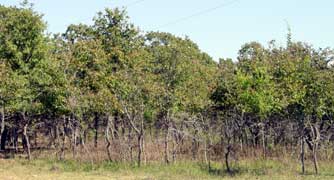