Several herbaceous species deserve comments because of their importance. Goats will normally consume most herbaceous species with a few exceptions, such as mullein (Verbascum thaspus) and yellow crownbeard (Verbesena occidentalis). 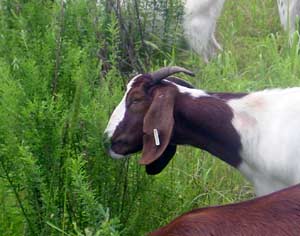 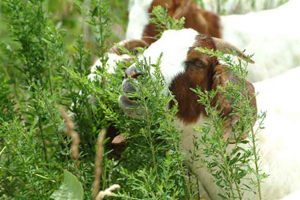 Sericea lespedeza (Lespedeza cuneata) – Goats often delayed consuming sericia lespedeza until mid-summer and then aggressively consumed it the remainder of the summer, often defoliating it to nearly level ground. Sericia has a large carbohydrate reserve in the roots of perennial plants and it takes three to five years for control. Goats usually consume the plants before viable seed is produced, mitigating the problem of their spreading the seed through fecal matter. This also aids in depleting seed in the soil seedbank and enhances long-term control. As goats graze and reduce the vigor of sericia lespedeza, grasses tend to fill in grazed areas.

Western ragweed (Ambrosia psilostachya) – Goats generally consume little of the species although there are reports in some areas of their consuming significant amounts. Sometimes, the goats will eat the reproductive portion of the plant, which may reduce seed production, but in general, they do not have a major impact on western ragweed.

Nightshade (Solanum elaegnifolium) – This plant is toxic in large quantities, and goats consume little of it as long as there is other herbaceous species available. There is anecdotal evidence that goats may consume enough nightshade to control it without suffering from toxicity. 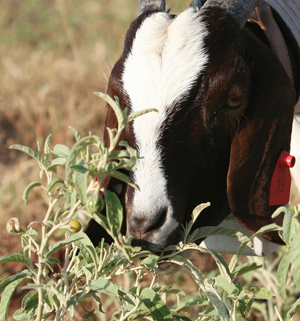