The most common reason given by producers wanting to manage vegetation is to grow more grass to produce more beef. There also may be a desire to enhance the productivity of degraded range sites or improve landscape aesthetics. Another reason is to control invading plant species, such as kudzu in the South, sericea lespedeza in several states, red cedar, various oak species and many other invasive plant species. Often, large ranches may have some vegetation problems and allow free goat-grazing or even pay for goat-grazing to control weeds and brush. 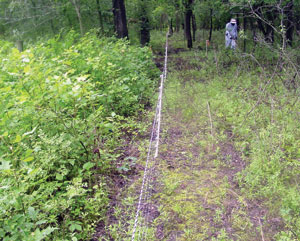 Reduction of fire hazards due to excessive brush growth is another important reason for managing vegetation with goats. Excessive understory growth and accumulation of fine fuel and growth of flammable species such as red cedar can lead to fire hazards. A large amount of government land is in an advanced stage of brush and weed growth due to budgetary constraints. These areas are developing fire hazards that are of concern. The potential for free, or fee-based, grazing provided by different local, state or federal government agencies exists and will grow in the future.

Dense understory brush can destroy wildlife habitat, a situation that can be remedied through grazing by goats. Goats can also assist in increasing the biodiversity of grasslands, thereby helping owners to be good stewards of the land. It has been observed that goats help to heal gullies and washes due to their behavior of walking in mass across these areas creating pockets with their feet where seeds can become established. In addition to restoring plant life and biodiversity, this also reduces water runoff and active erosion. Since goats do not like to walk in water, they do not pollute natural water sources with their waste as cattle do.

Factors in the Establishment of Unwanted Vegetation

Unfortunately, vegetation management is not as simple as removing undesirable plant species from a site. There are usually underlying problems that initially encouraged the growth of invasive or unwanted plant species. One of the biggest factors is erosion. Much of the severe erosion found in the southern United States is due to the cultivation of natural ecosystems with crops, typically cotton. This cultivation entailed the use of such practices as clean tillage and planting rows vertically on slopes. Once the land could no longer grow profitable yields, it was abandoned and became “go-back land.” By then, erosion had removed the top several inches of soil containing most of the nutrients and organic matter needed for plant growth. The remaining soil had severely diminished productivity, leading to reduced vigor of the grasses growing in it. Water infiltration rate and holding capacity are also reduced by cultivation due to accelerated losses of organic matter, the creation of plow-pans and loss of soil structure. This reduction leads to a greater proportion of the infiltrated water in the subsoil. Because woody species have deeper roots to obtain water and are good at sequestering plant nutrients, they are more competitive against grass in eroded areas than in the former non-eroded state. The loss of productivity potential of the soil limits expenditures that can be made for managing vegetation.

The second animal management factor that favors woody species is overgrazing. Overgrazing increases erosion, reduces water infiltration and reduces the vigor of native grasses, putting them at a competitive disadvantage to invading plant species. Another animal management factor leading to establishment of unwanted vegetation is grazing of an area by only one animal species, usually cattle. Cattle predominantly utilize grasses, a few forbs and almost no browse. Grazed plants, especially overgrazed plants, are at a competitive disadvantage to ungrazed species because of the loss of significant sunlight. Another factor has been the suppression of periodic fires that would assist in reducing establishment of woody species. As a consequence of the above factors, permanent ecological changes have been created at many sites that give a competitive advantage to woody species. Thus, if there is a desire to maintain areas as savannahs or grazing lands, invasive woody and weedy plant species will have to be perpetually controlled.

Producers have several options available for managing undesired vegetation; and the choice of method depends upon economics, potential for pollution, target species and acceptability of herbicide use. These options include using fire; mechanical methods such as mowing, bulldozing, roller chopping, chaining or root plowing; chemicals; and various species of animals for grazing.

Fire is an economical and effective tool for controlling many plant species, but some species readily sprout back from the roots or seed. Fire may be an effective pretreatment for goats, especially where the woody species are over 10-feet tall. However, fire can be dangerous if it gets out of control, and liability concerns have limited its use in recent years.

Most mechanical methods are too expensive; and although they can quickly achieve dramatic results, these are often short-lived.

Chemical control has been effective in the past but has become more costly due to the increasing expense of chemicals and application. Moreover, runoff and/or spray drift from chemical application can be a problem. Chemical control is not usually specific and results in killing more than the targeted species. Spraying native range for weeds has resulted in a 20-percent to 30-percent reduction in grassland production, presumably due to the herbicide killing nitrogen fixing legumes. Further, some individuals object to the use of chemicals based on their personal values.

Animal impact involves control of grazing animal species, seasonal grazing, duration of grazing and length of rest period for the site. Managing grazing in this manner can be effective in controlling some species of vegetation, but the required level of management is often unavailable.