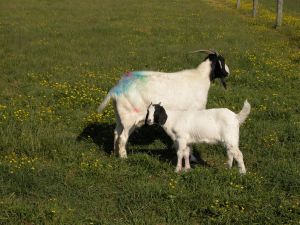 Doe with kid on pasture.

The environmental cue most dominantly affecting seasonal breeding in small ruminants is the annual change in day length (goats are considered short day breeders). Seasonal anestrous occurs when the day length increases and this period is associated with an absence of estrus and ovulation and decreased secretion of the reproductive hormones. Seasonal species are responsive to a hormone called melatonin which is produced by the pineal gland in response to declining periods of light. Melatonin secretion is required to stimulate gonadotropin releasing hormone (GnRH) secretion in order to promote cycling. Melatonin is synthesized and secreted during the night hours when it is converted from serotonin in the pineal gland. Therefore, light entering the eyes inhibits pineal gland conversion of serotonin to melatonin.

The pineal gland acts as a regulator of reproductive activity since it can either stimulate or inhibit gonadal function. During short photoperiods, such as in the fall, the long duration of high melatonin secretion switches on short day breeders such as sheep and goats and switches off long day breeders such as the horse and hamster. This explains why increased light (long days) would cause anestrus in goats since this inhibits the conversion of serotonin. Goats are therefore considered to be short day breeders because they begin to cycle during the shorter days of fall. The normal breeding season of goats is during the months of September, October, and November and they may cycle into January and sometimes February (varies for different breeds and in the area of the country).

For additional reading on the hormonal control of reproduction please click here.