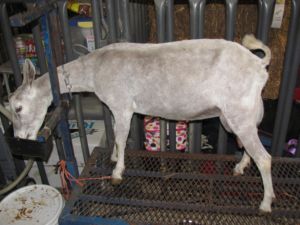 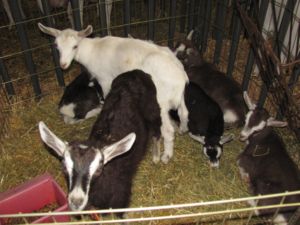 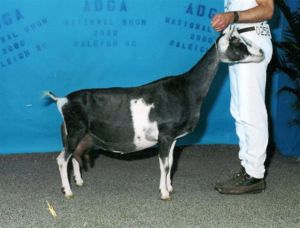 Sable goats are derived from the Saanen breed which originated in Switzerland. They may be any color or combination of colors except white or light cream.

Sables are the result of the interaction of recessive genes from the sire and from the dam. If the offspring has a dominant gene for white color, the animal is white and thus a Saanen and not a Sable. Color patterns can be complex; however, it appears that if the animal has two recessive genes, one from each parent, a colored coat is the result. Sable goats have various color patterns. Because the colored genetics were brought in with the original Saanen imports from Switzerland, Sables will continue to be born as long as people are breeding Saanens.

Sable does are feminine and heavy producers of milk and usually yield 3 percent to 4 percent milk fat. The Sable breed, like the Saanen, is medium to large, weighing approximately 145 pounds, or 65 kilograms, with rugged bones and plenty of vigor. The height at the withers is 30 inches or more for does and 32 or more for bucks. The general appearance is tall, heavy, and rangy. The body is very deep, wide, and long with well-sprung ribs pointing to the rear. Sables have a straight back with very little slope to the rump. The legs are long, squarely set, strong, straight, and wide apart. The ears are large and upright, sometimes rounding at the tip and pointing forward. The hair is short and fine. The head is wide and long with a straight or dished face. They have a deep muzzle and a strong jaw.

One reason for breeding Sables is the variety of color patterns. Another reason for keeping Sables is totally due to their color. White Saanens, with their light skin, do not fare as well in hot, sunny climates. Their light skin color makes them prone to skin cancers. Buyers from tropical countries know this and are often reluctant to buy them despite the Saanen size, productivity, and temperament. Sables do not have this problem. Their darker skin compared to Saanens makes them no more prone to skin cancer than are other breeds while retaining all the Saanen’s superior characteristics.