Many producers are concerned about tapeworms (Moniezia spp.)because they can see the moving segments — white rice, grain-like worms — in freshly deposited feces. Tapeworm eggs are ingested by field mites and infection is transmitted when mites are consumed with forage. Adult tapeworms reside in the small intestine, feed by absorbing nutrients from digested feed and cause very little damage. However, growth in kids may be somewhat reduced, and intestinal blockage may rarely occur. Infection can be controlled with albendazole, fenbendazole or oxfendazole.

Fasciola hepatica can be a major problem in low-lying perennial wet areas of the Southeast. This parasite resides in and damages the liver, resulting in unthriftiness, weight loss/reduced gains, and sometimes, death. The life cycle is indirect, requiring an amphibious snail as an intermediate host. Fluke eggs are passed in the feces, and a larval stage called a miracidium develops inside the egg over a period of two to three weeks. Eggs then hatch, releasing the miracidium, which infects a snail. Asexual reproduction occurs in the snail over a period of five to seven weeks, and then the mature larval stage, called a cercaria, leaves the snail and encysts on forage, where it develops to a metacercaria. Animals ingest the metacercaria when grazing. Snails are active as the source of transmission mainly from January and February through May and June, depending on environmental conditions. Snails burrow into the mud and become dormant the rest of the year, especially the hot summer months. Development to the adult fluke takes about six to eight weeks. Because transmission ceases in late spring/early summer, treatment to control flukes can be divided into two periods, February through August when immature and adult flukes are present, and September through January, when adults only are present. Diagnosis is done by using a sedimentation procedure to find eggs in feces. Regular floatation techniques are not good, as the floatation medium induces premature hatching of the eggs and they do not float. Clorsulon (Curatrem) is the only product that is effective against immature flukes. Clorsulon and albendazole are effective against adult flukes. Therefore, selection of either of these depends on the time of year. Another liver fluke, the deer fluke (Fascioloides magna), can kill small ruminants by destroying the liver. Infection is rare but should be considered where deer have access to pastures grazed by small ruminants. Control is difficult. 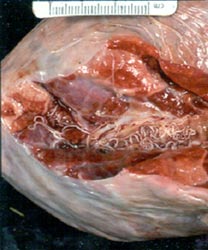 Lungworm infection occurs sporadically in the Southeast. Infection causes respiratory distress, or chronic coughing; unthriftiness, and occasionally, death. The life cycle of ‘Dictyocaulus filaria’ is direct, and adult worms live in the lungs, with larva being passed in the feces. Transmission occurs during the cooler months of November through April. Since the larvae, not the eggs, are found in feces, diagnosis is by using the Baermann procedure, which extracts the larvae from feces. Infection can be controlled with albendazole, fenbendazole, ivermectin or oxfendazole. ‘Muellerius’ and ‘Protostrongylus’spp. are other minor lungworms whose lifecycles are indirect, requiring land snails/slugs as intermediate hosts. Control is not as easy, and fortunately pathogenesis is minor.

The meningeal worm, also known as the deer worm or meningeal deer worm, frequently infects llamas, alpacas and occasionally, goats. White-tailed deer are the natural host for the parasite, so goats are at potential risk everywhere that white-tailed deer are found. Small ground-dwelling slugs/snails are intermediate hosts. Goats are not normal hosts but can ingest the slugs/snails harboring the infective form, and the larve migrate around, but not in, the spinal cord and brain. This causes damage to the central nervous system, which may be severe enough to result in death.

Animals become infected in the spring or fall. Clinical disease is seen in the fall and winter about three to four months after infection. Often, only one animal is infected at a time on a single farm. Infected animals will show a wide variety of symptoms, including rear leg weakness and uncoordinated walking, paralysis, exaggerated stepping motion, circling, abnormal head position, blindness and gradual weight loss. Generally, animals with more severe symptoms have a worse prognosis.

Diagnosis is difficult in the live animal and is usually made when animals die and the larvae are found on examining the spinal cord and brain microscopically. The use of ivermectin at monthly intervals during the transmission season of spring and summer has been used in attempts to prevent infection, but this strategy has not been proven. However, this frequent administration interval most likely will have an effect on the development of resistance by the other resident worms.