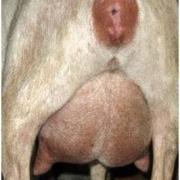 Lactation is a period of milk production. The organ that produces the milk is the mammary gland. In her udder, a doe typically has 2 glands (one in each half of the udder) and 1 teat per gland (one empties each half of the udder) and 1 streak canal, or opening, per teat. Boer and Savanna goats may have more than one teat per gland, but care should be taken to make sure that number and teat form do not cause problems with nursing by the kids. Small non-functioning teats may be found in several breeds.  Milk letdown results from sensory nerves in the teat and flank or other stimuli such as the kid crying. The hormone responsible for milk letdown is oxytocin, which causes smooth muscle cells inside the mammary gland to contract and move the milk through the duct system inside the gland. Milk letdown can be blocked temporarily if the animal is frightened or stressed.

Following kidding, there is a period early in lactation during which the female does not come into heat. This time period is known as lactational anestrous and gives the uterus time to heal and gives the mother time to wean her kids before getting pregnant again. Eventually, even if nursing a kid or being milked, the doe will start cycling again.

The period of time from kidding to return to heat/estrus cycles can be delayed by:

For additional reading on kidding in goats, please visit: